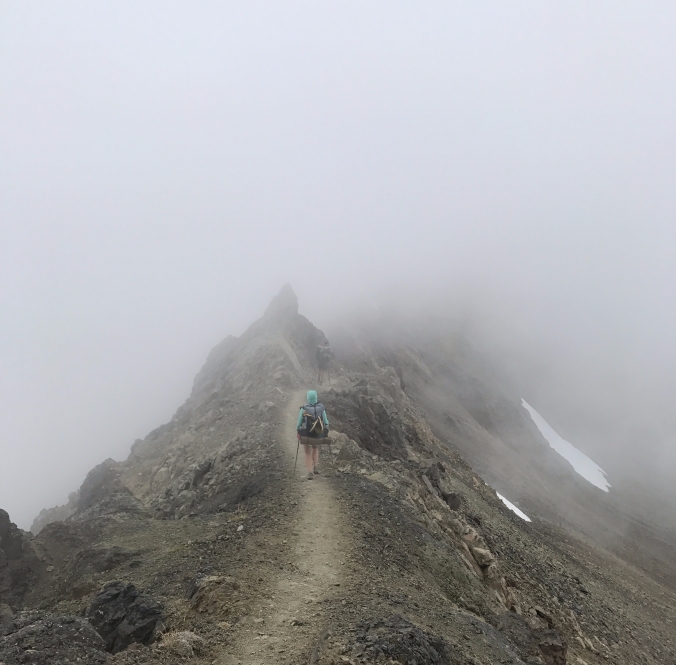 What makes us human? That’s the central question of all science fiction. To answer it, remove a human from all familiar context: isolate them in the far reaches of the galaxy. Force them to interact with aliens. Pair them with an artificial intelligence so convincing that it seems indistinguishable from a real person. Away from the familiar, we can begin to see what is innately “human”, rather than what is an expected response to common stimuli.

In undertaking a thru-hike, I imagined I was doing something similar to myself. If I hurl myself into the unknown, away from my work, my home, and away from everyone I knew except my husband, what would remain? A science fiction story is a kind of experiment: a theory, a combination of known and unknown factors, setting things in motion to see what happens. I wanted to test myself in the same way. What makes me Betty?

Is this low-level tension just part of who I am, or the result of living in a densely populated city for over a decade? I’ve always squirmed at dirt or feeling dirty; am I always going to feel slightly uncomfortable outside, trying to ignore the itchy brain feelings that dirt on my skin gives me? What about more nebulous traits: my nervousness around strangers, finding it hard to share things about myself, needing a lot of control over my surroundings?

I wrote earlier about the panic attacks that were striking me frequently and unexpectedly. I did feel thrust into an alien environment; sometimes, if there was nothing specific for my anxious feelings to latch onto, I’d find myself afraid of the landscape itself: the scale of the mountains, the distance across a valley.

The attacks persisted all through the Sierras, through late August. I struggled with constant nausea that made it hard to eat enough, and eventually I took a week off trail to rest in town, stuff myself with calories, and see if the doctors could figure out what was wrong with me (they couldn’t, although the week of eating did me good.) The effect of my panic attacks was cumulative- even as the anxiety dissipated after each attack, I was left feeling increasingly tired and raw.

I have always done best with a routine to structure my life around, and I knew that a thru-hike meant abandoning all sense of regularity. New routines do develop on trail- rituals of setting up camp, eating dinner with our hiking companions, timing breaks throughout the day- but even these take place in different places under wildly unpredictable circumstances. I began feeling displaced, alien to myself.

The last part of the hike, though, was different. The nausea passed. Although I’d been hiking capably for awhile now, it was after we’d finished the Sierras (and triumphantly summited Mt. Whitney) that I started really feeling confident in the ability of my body to carry me 25+ miles a day. I felt healthy and strong. The panic attacks ceased. I felt a little like I was coming out of a cocoon. The emotional vulnerability I’d been experiencing turned into a power. I felt capable of being open and honest and exploring new feelings. While I struggled with identifying all of these feelings, or with consistently finding the courage to express myself clearly, I did feel strength in laying myself bare.

That newfound strength manifested in other ways, too. My literary companion throughout the hike was Octavia Butler’s “Parable of the Sower”, a book that was almost too painfully relevant to read on this journey. A dystopic, near-future California is suffering through environmental crises, economic devastation, and the threat of a demagogic, white-nationalist President. The characters head north on foot, dodging forest fires and scavengers, and eventually find land to build a sustainable, egalitarian community outside of the established, crumbling, capitalist structure. Science fiction isn’t just asking what humans are, but also imagining what we can be.

Being in the woods most of the time spared us from the daily horror of the 2017 news cycle, but we’d be bombarded with headlines as soon as we got into town, and were able to access wi-fi. Threats of nuclear annihilation or racist violence loomed like a dark cloud, leading to on-trail conversations about what we’d do if, next time we made it to town, we discovered that society had collapsed into chaos. Mostly-tongue-in-cheek plans for looting and stealing bikes ensued, but a seed of truth planted itself in my mind. We also talked, half-jokingly, about what kind of post-apocalyptic community we would establish in the wake of this disaster, and most of my ideas were strongly informed by Butler’s writing. I’d already been thinking a lot about ad hoc communities, because I kept marveling at the relationships that formed organically among the disparate bunch of lovable weirdos who became our family on trail.

Echo Lake with the whole gang, after a zero in South Lake Tahoe with legendary trail magic provided by the inimitable @bless_this_mess

These were people from all over the globe, none of whom knew each other before the trail (except Tim and I, of course), who initially bonded over not much more than our shared goal of getting to Canada on foot, and a sense of humor that was, by turns, extremely sophisticated and hilariously scatological. We were rarely all together in one place, but any given faction of the group functioned just as well- whether coordinating logistics of travel, making logical decisions about backcountry safety, or simply being buoyed by our camaraderie at the end of a tough day. It became clear pretty quickly that I would trust any of these people with my life.

The lesson, here, is that this kind of community rarely forms in adult life, especially in an adult life shaped by the kind of isolation wrought by consumer capitalism. News from the outside world made it increasingly difficult to imagine “business as usual” upon returning to civilization. Having lived for six months in a new way, with a completely different social structure, and mostly unbound by materialism, provided hope for something different. It was a new kind of living- a new way of being human. Coming off trail, many of us felt impelled towards greater political and community involvement. That spontaneous, joyous bond shared with other hikers is my own inspiration and strength for activism going forward.

After we finished the hike, we traveled home through even more alien landscapes.

We didn’t yet have a home that we were traveling to. We spent three weeks in hotel rooms, in my childhood bedroom, in friends’ guest rooms, in more hotel rooms. We didn’t even really have computer access- we booked all our lodging, researched places to live, and set up appointments all from our phone, which isn’t unusual in 2017, but seems a little like sci-fi in its own right. Eventually we found an apartment, moved most of our things out of storage, and started settling back into “real” life.

Of course, real life isn’t any more or less real than what we experienced on the trail. I’m back in the same office, but our home, our commute, even our city-dwelling friends are different. I can’t define clearly the ways in which the trail shaped me, or I shaped myself on that journey, but everything feels refracted and distorted through new lenses. I feel as though I’ve been on a different planet, examining and practicing new ways of being, and I’m not yet sure how to fit what I’ve learned into a daily grind of working, commuting, and living in a city.

Just as no science fiction story can fully answer that question, “what is human”, I am only marginally closer to figuring out “who is Betty.” I’ve pushed and pulled at every part of myself, surpassing what I thought were my physical and emotional limits, and am figuring out what aspects of me are malleable or rigid. The person who started the thru-hike is alien to me, now, but I’m also still exploring my post-trail identity. The chapter defined by the trail has ended, but the horizons that opened up around me are still unimaginably vast.

We're using our PCT thru-hike to raise money for some important causes! Check it out, and contribute if you're able, here.

Tweets from the Trail